Water Conservation Orders (WCOs) are described as the ‘National Parks of waterways’.  They have been set aside, through a nationally proscribed process, to protect their outstanding natural values.  The priority of their management is to protect any identified outstanding features such as fisheries, wildlife, Maori, cultural, recreational, wild and scenic or scientific values.  They exist in perpetuity, unless amended.

Once the outstanding values are recognised, the WCO must set out what restrictions on water use may be required to ensuring the outstanding resource is maintained, such as prohibitions on damming, maintenance of river flows and water quality, and restrictions on in-river works. This process granting WCO protection is arguably more robust  – and certainly more independent  – than that required to create a National Park.

Despite the RMA being ‘environmental’ in its focus, there are few means of actually securing enduring protection for resources (particularly freshwater) being managed under the Act. For example, although it’s possible to apply for consent to take water from a river, it is not possible to consent leaving water in the river for ‘instream’ purposes.

A notable exception in providing protection is the WCO provisions in Part 9 of the RMA, http://www.legislation.govt.nz/act/public/1991/0069/latest/DLM236751.html which are intended to:

(a) outstanding amenity or intrinsic values which are afforded by waters in their natural state;

(b) where waters are no longer in their natural state, the amenity or intrinsic values of those waters which in themselves warrant protection because they are considered outstanding. – [Section 199, RMA] "

Regional plans can have protective measures in them such as prohibitions on damming, but as these have a 10-year life they cannot be regarded as providing enduring protection for any features.  In any case, such prohibited activity rules in plans are rare.  They are also, by definition, recognising values at a regional rather than a national level – remember that WCOs recognise water bodies of ‘national’ significance. Regional plans are also optional and some regions have not produced comprehensive plans which been effective of protecting water bodies from development; particularly from the effects of land use on water quality.

Originally established in 1981 as the ‘wild and scenic’ amendment to the former Water and Soil Conservation Act 1967 (WSCA), WCOs were established by the then National Government to provide a counter to the then National Development Act, which was introducing ‘Think Big’ schemes to many waterways. This included the highly controversial Clyde Dam project on the Clutha River.

It was recognised that the ‘multiple use’ approach of the WSCA was leading to the progressive whittling away of many outstanding waterways which clearly needed a means to ensure their protection.  Very few New Zealanders will recall the Waikato or Clutha rivers in wild state, their natural character and rapids now drowned beneath artificial lakes storing water for hydroelectric power generation; the great salmon runs in the Waitaki and Clutha were consigned to history decades ago when dam construction blocked fish passage.

In the early 1980s, considerable investigation was undertaken into waterways worthy of national-level recognition; to date, 16 water bodies have been protected by WCOs.  Many groups have applied for WCOs – notably Fish & Game NZ, Whitewater NZ, Forest & Bird, QEII Trust, some iwi and, in one case only, DOC.  Many outstanding waters, however, have never had WCOs applied for to ensure their protection.

When the RMA was introduced in 1991, WCO provisions were translated into the new environmental legislation to achieve the purpose of preservation or protection of New Zealand’s outstanding waterways. In other words, the need for WCOs was and still is there.

Interestingly, although regional councils are responsible for water management including the management of WCOs after they are created, they have often proved hostile; seeing them as displacing local decision making and fettering their options in water development. None of the original WCOs applied for were even supported by any of the regional councils in their respective areas.  For example Otago Regional Council policy director Fraser McRae, was quoted in the Otago Daily Times of 13 March 2013 as saying, ''We also disagree with the use of water conservation orders. They are redundant.''  Are they?  Otago has a WCO on the Kawarau River catchment.

The Land and Water Forum (LWF) considered many aspects of water management, but the only recommendation affecting WCOs sought to strengthen them by ensuring that, if necessary, constraints can be put on land uses which may diminish outstanding waters.  Despite this, the Government’s recent Freshwater Reform package goes completely against LWF recommendations and proposes unilaterally ‘improving’ WCOs by allowing the Environment Minister to:

Leaving aside regional councils historic views on WCOs, this one-sided approach towards WCO applications would be treated with outrage if it was implied that large consent applicants were to be treated in the same way, with the ability to put their resource development aspirations on hold pending consideration of an open ended alternative mechanism. This is symptomatic of a raft of proposals in the Government’s RMA reform package i.e. it plans to transform this environmental management tool into legislation that removes vital checks and balances against potentially unsustainable natural resource development. This is entirely counter to the intended purpose of the RMA which is to provide for use, development, and protection of natural resources.

By introducing this proposition without endorsement from the much vaunted collaborative process in the LWF, the Government has demonstrated a willingness to undermine its own process by cherry-picking particular aspects, or worse, making them up when it suits. This hardly inspires confidence in the Government’s other proposition in its freshwater reform to promote more ‘collaborative’ processes in the RMA reform proposals.

Regrettably, this is only history repeating itself; a similar provision downgrading WCOs was included in the Environment Canterbury Act, without any prior notice, effectively shutting down a WCO application for the upper Hurunui River.

On its own, this might be a significant concern. But together with proposals to diminish other protections for water resources in proposed changes to Sections 6 and 7 of the RMA (which guide all decisions under the RMA), the Government has clearly signalled hostility towards protection of water resources.

These proposed changes include removal of any reference to matters of national importance, introducing uncertainty by limiting protection of habitats only to those which are specified or significant, not requiring protection of aquatic habitats, removing the requirement to maintain or enhance public access to waterbodies, and completely deleting any reference to consideration of intrinsic values, finite characteristics of resources, amenity values, stewardship or the quality of the environment.

What possible advantage can these changes have to protection of freshwater, and many other, resources?  These are also to be removed while consideration of various matters relating to resource utilisation is to be added.  Government has advised these changes for ‘consultation’.  Any concerns should be registered by way of the public process http://www.mfe.govt.nz/rma/reform/phase-two/public-meetings.html and to your local MP as no doubt these matters will be put in a Resource Management Reform Bill soon.

• Neil Deans, a former President of the NZ Freshwater Sciences Society, has been a Fish and Game Regional Manager for nearly 20 years, with part time national responsibility for freshwater resource management.

"A WCO affords water bodies National Park level protection status, and is the only statutory tool we have that puts serious integrity behind freshwater in the ‘100% Pure’ Kiwi brand,” says Fish & Game chief executive Bryce Johnson.

"It’s appalling that this Government is trying to dupe the public by saying it is ‘improving’ the WCO process, when in reality its plans will render WCOs useless as a tool to protect rivers from a greedy few for increased irrigation and intensive farming. Make no mistake – this is all about escalating the public water grab for private industry.

"Exploiting our remaining pristine rivers demonstrates this Government’s total disrespect for anything that gets in the road of so-called ‘economic growth’, this anti-environment agenda blindly ignoring both the economic impact on tourism as well as the connection Kiwis have with our rivers, lakes and treasured natural places.”

The strength of WCO law is that outstanding water bodies are protected – end of story. But it gets worse, points out Mr Johnson who warns that the Government’s proposals would also create a process for all existing WCO-protected rivers to be opened up for ‘economic growth’, which is precisely what WCOs were established by a previous National government to counter.

"How is that an ‘improvement’? It’s like saying National Park protection is being improved by allowing mining,” says Mr Johnson.

Fish & Game and its licenced anglers and hunters, along with other conservation organisations and Iwi, have spent millions of dollars to safeguard some of the country’s most outstanding waterways through WCO applications. This has enabled the protection of highly-valued sport fisheries (such as trout and salmon), habitat of native species and freshwater-based recreation for all New Zealanders.

Further, Mr Johnson says the  proposals are completely counter to what the Land and Water Forum (LWF) actually recommended to Government.

"The LWF recommended that WCOs should be strengthened ‘to achieve an integrated management approach including land use’. In other words, to require adjoining land uses to be compatible with a river’s protected status – the upper Mohaka River, which has a WCO, has been ruined by the failure of Hawke’s Bay Regional Council to control dairy expansion and pollution in a major tributary. "

"Not only that, there’s been no consultation at all. The Government clearly has no mandate for such a proposal – it’s a National disgrace in every sense!

"New Zealanders from all walks of life love their rivers and lakes and are deeply concerned about their continued and sustained environmental degradation. Part of the real ‘New Zealand Story’ is about being able to swim and fish and gather food from clean waterways – it isn’t about having already protected rivers opened up to economic development to benefit a minority group of industrial farmers.” 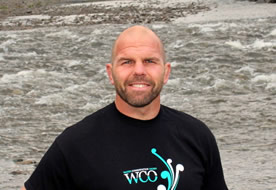 While political debate centres on claims to water ownership, environmental and recreational groups are spearheading a campaign to raise awareness of Water Conservation Orders (WCOs) which protect some of the country's most outstanding rivers for all New Zealanders.

Fish & Game NZ, Forest & Bird, Environmental Defence Society (EDS), Whitewater NZ, Federated Mountain Clubs and other environmental and recreational NGOs have teamed up to highlight the importance of WCO-protected waterways - 15 throughout the country - and push for the protection measures to be strengthened. 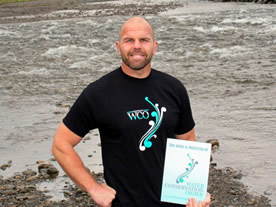 Former All Blacks captain Anton Oliver is throwing his weight behind a new environmental cause – protection of the country's outstanding wild and scenic rivers.

Although now based in London, Oliver says on recent visits back to New Zealand he's been staggered by the rate of decline of many of our country's rivers and waterways. 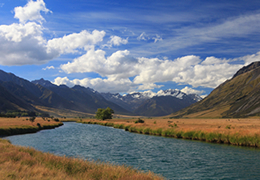 Fish & Game NZ says a report due for release today throws weight behind the growing call for greater protection of the country's finite and dwindling number of outstanding rivers, so important to New Zealand's international brand.

Parliamentary Commissioner for the Environment (PCE) Dr Jan Wright will today release her investigation into the conflict between hydroelectric power schemes and the irreversible environmental damage caused to wild and scenic rivers.